It’s cleanup time on my Mac, and the Quick Look <Spacebar> feature in Finder is essential for sorting the keep from the delete. The default set of supported file-types is a little lacking, but there’s plenty of extensions to fill the gaps. Here’s a list of what I use.

For all your text based tabular data viewing needs.

An odd name, but this one is handy for viewing text files like README and LICENCE files that have no extension.

Preview inside zip files without needing to extract them.

Trekking to Annapurna Base Camp

Exhausted after our Manaslu Circuit trek, we crammed into a micro-bus for 4 hours before being delivered into the honeymoon suite of a hotel in Pokhara. Our not so favourite guide had booked it for us, hoping to provide an amazing view from the 4th floor, but hazy weather prevented any of that.

It was a discounted price for the room, but more than we wanted to pay and not quite as relaxing as intended with the garden being torn up and no wifi in the room. We only stayed one night before foolishly moving into a dive of a hotel hotel that was neither clean nor with reliable hot water.

The lakeside section of Pokhara where we stayed is extremely touristy, alternating between dodgy hiking gear stores, adventure travel agents, western style restaurants, jewellery stores, and cashmere merchants. It is however so much more relaxing than anything we found in Kathmandu. We enjoyed a few days rest without doing much of note, and unfortunately continued missing out on the spectacular mountain views that Pokhara is known for.

We rose early to start our next trek, and were accosted by taxi drivers and bread boys as soon as we set foot on the street. Stocking up for a snack later, the taxi driver agreed to our price and to wait for us to eat breakfast before driving us the 25 minutes to Phedi to start the big walk up the hill, blissfully alone.

The only issue we had with trekking without a guide was some minor uncertainty about which way to go since our map was too large a scale to show any detail of the villages we passed through. I was sure we had gone wrong at one point after descending a few hundred steps, but it was fine and we were simply moving faster than I’d realised.

Neither of us were the picture of health so we set a gentle pace with two relatively short days, finishing around lunch time, but still wearing us out. This brought us to the beautiful village of Chomrong, where a rowdy pair of Englishmen caught our attention and lured us into Chomrong Cottage guest house. It is famous from a years old Time Magazine article naming it home of the best chocolate cake in Asia.

It was a quiet day at the guest house so we scored the biggest room with the best view, but had no idea until dawn when we could feast our eyes without even getting out of bed.

Throughout the planning and the trek I had been angling to go up to Annapurna Base Camp, an excursion which requires a few extra days in and out. Meanwhile Neets was wanting to do a shorter circuit just taking in the view from Poon Hill. Our dinner companions that night were a couple of girls who had been to ABC and strongly recommended we go up. In particular, the lovely young doctor from Sweden, who happens to run ultra marathons, suggested we lighten our loads and walk up one day and back the next. She said it wasn’t that far at all. I was dubious but Neets’s competitive spirit was roused.

We set off early at a brisk pace, down, down, down a never-ending set of stairs, across a new swing bridge and then immediately back up 600m of rough stairs on the other side of the valley. The path eventually flattened and we started winding up up the steep sided valley through the most incredible rain forest and bamboo groves. We climbed gradually but steadily throughout the day, with amazing views in the morning and then miserable clouds and rain in the afternoon. The track steepened, the damp seeped into our clothes, our breathing was labouring, and visibility was non-existent so we stopped early at the first shelter at Machapuchere Base Camp. We scored the last available room and some very welcome hot tea and dhal bhat.

After a chilly night, we woke before dawn and as the mountains started glowing around us we crunched our way up the snowy path the final hour to ABC. It was the most spectacular sunrise I’ve seen, and the sun didn’t even get above the mountains while we were there.

Knowing we had a long day ahead, and shivering violently from the cold, we started back down. It wasn’t exactly a hasty retreat as the amazing views had me pulling out my camera every 50 paces. The snow had turned to ice on the track and both of us ended on our ass in exactly the same spot.

A hasty breakfast at MBC and we continued on our way. In turn racing past trekkers and porters and then stopping to take more photos as the scenery hidden the afternoon before was revealed to us in the glorious morning light. We made excellent time, and were on track to get back to Chomrong with plenty of daylight left. Until we got to the stairs.

Normally Neets is quick going down and I’m faster going up, but we both struggled with the seemingly endless drop into the valley and climb back out. The thought of chocolate cake and hot showers was all that kept us pushing through the pain in our legs.

Unfortunately the pain in Neets’s leg started focusing in on her knee, worsening overnight and through the next day. We stopped at lunch time to discuss our options for the next day. Poon Hill was out and we needed to take the easiest route back to the city. Even this involved 3-4 hours of walking plus the same again on a bus, winding down a treacherous dirt track with the driver blasting local rap music and talking on his mobile.

We were both looking forward to kicking up our feet and enjoying some more relaxing days in Pokhara. I had a brilliant tandem paragliding flight from the local hill, famous the world over for its reliable conditions. We caught a thermal up above the seeming hundreds of other flyers, and then cruised out over the lake before spinning in for a perfect landing. That afternoon we had an amazing cooking lesson with a local lady and student translator who took us through every step of cooking the Nepali standard dish of Dhal Bhat. Unfortunately food poisoning from an unknown source brought me down before I could eat, and made the rest of my stay and the bus back to Kathmandu a very trying ordeal for the both of us.

The other downer is that Neets’s knee still hasn’t healed. I would say it’s the last time we’ll be spurred on to doing something athletically silly by a foreign challenger, but I don’t believe it for a second.

Instead of further trekking we have been exploring the cultural history of the Kathmandu Valley, visiting the ancient city-states of Patan and Bhaktapur, both full of ancient temples and stupas. We also had a peaceful trip up to Nagarkot, with the hope of 180° views of the Himalayas, but were foiled again by the haze.

As I finish this we’ve been enjoying a peaceful final day in Nepal with an afternoon of Spanish food at the Bodhnath Stupa, the largest and most impressive Buddhist stupa in the world.

We’ve had a great time here and will miss it, but are very much looking forward to getting back to Australia.

This new book on typography gives a pretty great run-down on the basics, and beyond, on using text. Butterick does seem to push a little bit too hard on using his own fonts, so although the book is free, it feels like a big ad. The information is still very useful and sound.

Another free web book published this year is The Shape of Design by Frank Chimero. It also manages to be beautiful, while living inside a web browser. It has no underlying sales message either.

Evil on the Web 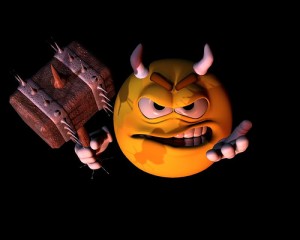 Evil emoticon by wstera2 Google emailed me this morning, letting me know this site had been hacked. My first thought was Scam. But on closer inspection, someone had indeed modified every php file here to spread the infection and redirect people to unfriendly websites.

It is entirely my fault, for not changing passwords when my web host told me to. But it’s also a wakeup call about how much badness there is on the internet.

Everything is fixed now, and might even serve as an incentive to post a little more regularly. Seems unlikely however.

If life gives you lemons, make lemonade. Or, if you foolishly leave your climbing shoes at home, make awesome photos. 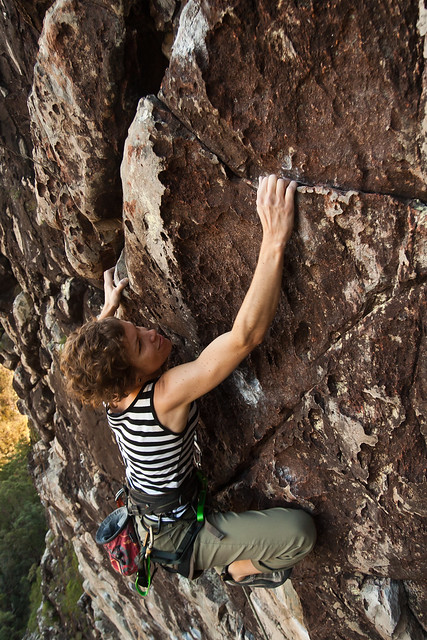 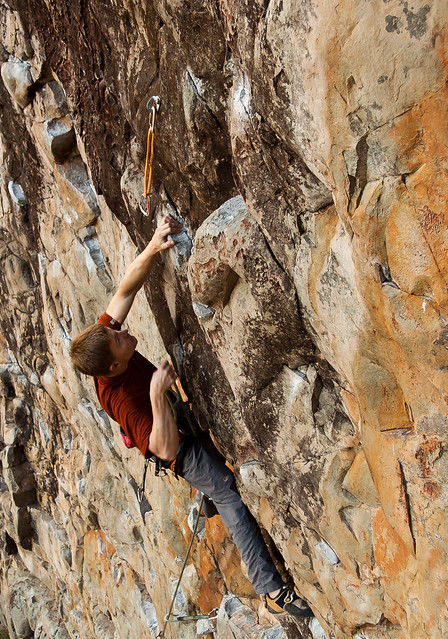 ]2Tom climbing Wailer (25) It was a lot of fun hanging on a rope taking photos of friends on spectacular rock climbs. Everyone’s getting really strong.

Is a very long time between posts. More than 10% of my life.

The trip I started in my last post was a resounding success. I rock climbed on 4 continents in 10 countries while travelling around the world. Celebrated the new year by sleeping in a snow cave on top of a mountain. Caught up with many old friends and made many new ones.

The time since then has been rather less exciting, but also much more relaxing.